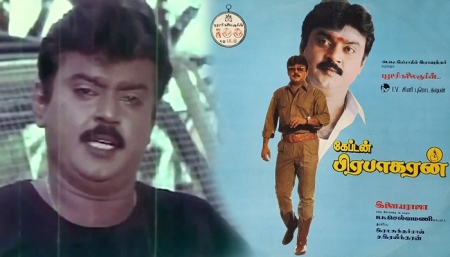 Captain, as fondly ennobled by the entire Tamil film fraternity, actor Vijayakanth has been the biggest star to offer back to back hit movies. However, when it comes to 100th movie, there has been a constraint, where any star wouldn’t be able to deliver a magical hit. It has been the same for Superstar Rajinikanth, Kamal Haasan and any other South Indian superstars. However, Vijayakanth proved to be a unique star by delivering a box office hit with his 100th movie ‘Captain Prabhakaran’, which was directed by RK Selvamani.

The film being an edge-seated thriller made a box office runs of 275 DAYS in many theatres and it was the first movie to be screened at the newly opened theatre –Rakesh Cinemas, Chrompet at that point of time. Despite being the newly inaugurated theatre, this film offered a bigger bonanza by running successfully for 150 days, there alone.

The film is getting to ready again telecast on Jaya TV soon. So, if you haven’t watched it, just give a try and just see how well it engages you.