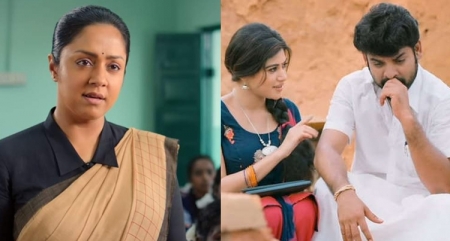 This weekend is going to be quite an unusual mix of flicks for the film buffs. There are three major releases, among which two of them are Tamil and one among them is world’s most expected Hollywood film ‘Spiderman Far From Home’, which will be releasing on July 4.

Raatchasi – Hitting screens on July 5, the film features Jyotika in lead role with Poornima Bhagyaraj and Sathyan appearing in prominent characters. Sy Gowtham Raj has written and directed the film, which is produced by SR Prakash Babu and SR Prakash for Dream Warrior Pictures. Sean Roldan is composing music with Gokul Benoy handling cinematography and Philomin Raj on editing. The film revolves around how a notoriously disciplined teacher’s arrival at a Government school changes the way of entire ambience there.

Kalavani 2 – Vemal and Oviya along with the entire star-cast in 2009 had enthralled everyone in multiplex and single screens. Now they are back with the sequel and this time, they are much more confident to engage you all with unlimited amusement and laughter.