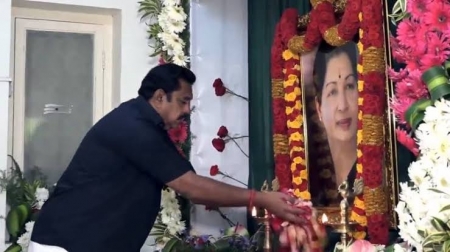 Later, the AIADMK leaders, functionaries and cadres took a oath administered by Panneerselvam and vowed to work unitedly and help the party to retain power for a third time in the Assembly elections due in April-May next year. They also vowed to safeguard the principles of democracy by keeping at bay one family, that is pursuing dynastic politics, from coming to power.

Recalling Jayalalithaa's assertion that Tamil Naduwould not grow on the path of development and progress if one family comes to power in the name of democracy, the AIADMK leaders vowed to keep such forces at bay and continue the party's victorious march on the path shown by the late leader.