Is sorry enough? ask people to DMK on remarks against Dalits by their leaders 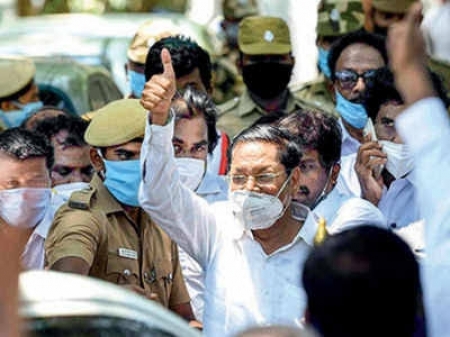 After DMK Rajya Sabha member R S Bharathi was arrested by the Central Crime Branch (CCB) wing of the Chennai city police under the SC/ST Act for his derogatory remarks against Judges belonging to the Scheduled Castes and released on bail, a section of people have questioned is it fair for their leaders to ask sorry after making such derogatory comments at them.

They say, 'Will the sorry be enough for us. They have hurt our sentiments and now they say we have regretted it. It us unfair'. They add that it is not just Bharathi but also senior leaders like T R Baalu and Dayanidhi Maran have also made comments against us. 'Now they have filed anticipatopry bail pleas in the Madras High Court,which granted them relief till May 29.'

Both the DMK MPs feared arrest for making 'inappropriate remarks' while addressing the media after meeting the Chief Secretary at the State Secretariat last week to submit the representations received from the people housed in COVID-19 lockdown relief camps.

The party has been claiming themselves as saviour of oppressed. But the leaders speak different. Wonder why alliance partners like Viduthalai Chiruthaigal are keeping quit, they ask. They are not practising what they preach, say many. Baalu and Dayanidhi alleged that  Shanmugam had humiliated them and treated them like oppressed citizens, following which several complaints were filed against them.