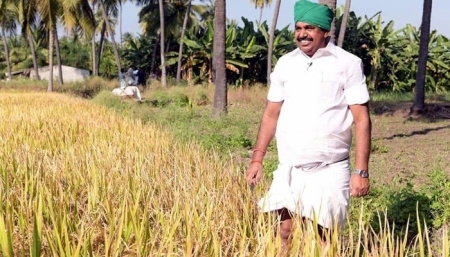 Today Tamilnadu Chief Minister Edapadi K Palaniswami celebrates his birthday and wishes are pouring in from many including Prime Minister Narendra Modi. But with a huge task of fighting Corona outbreak, EPS has set his focus on ensuring all is well in the State.

Ever since corona broke out, he has been watching the developments closely and holds day-to-day interaction and instructs Ministers and officials to take necessary action. EPS who is determined to make sure that none suffer during lockdown has been personally monitoring things. He holds regular interactions and takes decision at war- footing. Be it procuring necessary medical kits or instructing officials to visit government hospitals to take a close look at patients or increasing corona tests, EPS has been leading Tamilnadu at the forefront.

Today several districts have seen corona cases come down but for Chennai due to Koyambedu corona outbreak. And experts say due to EPS' meticulous planning the mortality rate is very low. Number of  deaths is very less in the State. EPS has won the admiration of many. He has emerged a strong leader today. He has been planning and executing the welfare measures as dreamt by Amma Jayalalithaa, says AIADMK cadre.

People also say that EPS has been striving for welfare of the State. He can be easily approached and accessible. The negative plans of opposition including DMK was thwarted by him. He has been following the ideals of MG R and Jayalalithaa, says party workers.We at Thandora wish him a happy birthday and more success in coming years. Wish him to continue his great work for Tamilnadu.