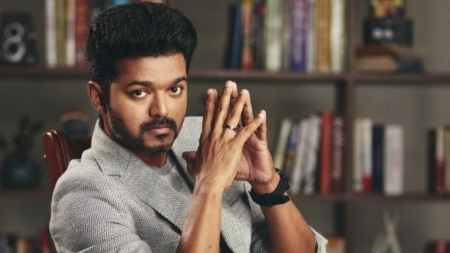 Actor Vijay celebrates his birthday today. As part of the mega celebrations, Sun Pictures, the producers of his forthcoming movie released a couple of posters from the film and also revealed the title.

The movie has been named Beast. On this day let's look back at five top movies that propelled Vijay to stardom and won him accolades.

Poove Unakkaga, directed by Vikraman, was the first box office hit of Vijay. It made him popular among the audience. Vijay played the role of a young man, who struggles to get his ex-lover to marry her boyfriend.

The family drama was well enjoyed by many. It had emotions, humour and family sentiment. Music by SA Rajkumar was a huge hit. Sangeetha, Charlie, Nagesh, Sachi acted in the film.

Vijay played the role of a college student, who falls in love with a girl of another religion. After being rejected by her brothers, Vijay evades her to marry.

However after realising love for their parents, they decide to sacrifice their love and the film takes a turn, when eventually their parents understand their love and permit their marriage. The film is directed by Fazil. Ilayaraja's music was a huge hit.

Directed by Ezhil, tje romantic drama helped Vijay create a fan base in Kerala, it also showcased the acting potential of Simran. The movie was about Kitty who lives a happy life.

He falls for Simran and a freak accident makes her visually challenged. But without revealing his identity, Vijay helps her realise her dreams. Songs by SA Rajkumar are huge hits.

A remake of Telugu film Okkadu,  it was helmed by Dharani. Vijay played the role of a fiery young man, who is also an expert Kabbadi player.

Vijay's athlete role was highly enjoyed by the audience, and it turned into his first film to cross Rs 50 cr at the box office. Trisha, Prakashraj won adolation for their performance. Vidyadagar's music is still admired by Vijay fans.

Thuppaki hit the big screens in 2012 and became a huge hit. Thuppakki stars Kajal Aggarwal alongside Vijay in prominent roles.

It also features Vidyut Jammwal, Manobala, Sathyan and Jayaram amongst others. This action drama was directed by A R Murugadoss. It was first Vijay movie to garner Rs 100 cr collection. Anirudh scored music for Thuppaki.