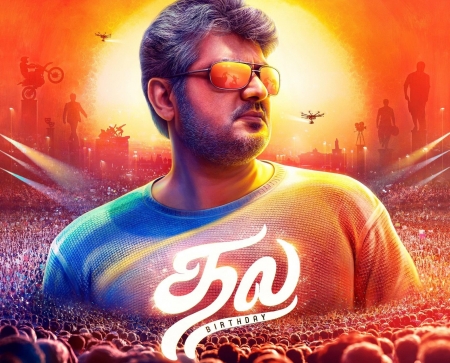 We just don’t want to stretch out the maximized statements about ‘THALA’ in the introductory part and would like to bring you some 25 interesting facts about him on the occasion of his birthday.

1. We all know that Ajith Kumar and Vijay have been close friends despite the fan base wars. But be it any of his close friends or the third persons showing some trolls about Vijay or spreading negative comments about him in his place, he would never mind to throw them out.

2. It’s a very well known fact that Ajith Kumar is a vivacious cook and his far-famed for preparing delicious Biriyani. But, he is an expert when it comes to making Sambhar. You can feel the aroma of it as you enter the house.

3. If you have got a personal invitation from his house, he would wait at the entrance and take you inside.

4. The first part of welcoming would be a voluntary preparation of coffee to the guests.

5. According to Ajith Kumar, the term ‘Rest’ means not to sleep, but get involved in other activities. He would never prefer sleeping in the afternoons.

6. Switch off all the lights and even a candle in his house and ask him to get any material, which might even be a pin, he would do it instantly. The reason – He would keep all the things exactly as they are.

7. He is always Mr. Gentleman when it comes to women. The way he treats and respects them reflects even on the screens. Initially, Devayani was approached to play Kanika’s role in Varalaaru. However, she rejected the offer for a particular dialogue “Aambalaya Nee?” “Are you a Man?” The actress said that she cant utter such words even for the sake of films.

8. Actor Madhavan had admitted that Ajith Kumar has been a greater support towards him during his initial days in Chennai.

9. Ajith Kumar always wanted to grow to a greater magnitude along with Chiyaan Vikram and that’s the reason, he would prefer working with him in many movies, which didn’t happen. In fact, in 1998 he wanted to remake Rajinikanth’s Thee, where Ajith would appear in Rajini’s role and Vikram as his elder brother.

10. During his visits to any hotels, if any dishes feel really great for him, he would never mind walking into the kitchen, meeting the chef and getting the recipe.

11. He was one among the early stars to work in lots of multi-starrer movies.

12. During the first day release of his movies, he would sit inside his room avoiding all the celebrations and excitements.

13. The book changed that his life was ‘The Himalayan Masters’, which was gifted by none other than Superstar Rajinikanth.

14. Although, he shares a very good bonding with his friends and family members, he doesn’t prefer recommending them for in professional front. This includes his brother-in-law Richard.

15. It was Ajith Kumar, who suggested that his sister-in-law Shamili to pursue fashion designing in Singapore and personally got her admitted there.

16. Whenever the shoot is in Chennai, he would rush to Gym after 6 p.m. and directly visit home to play with his kids.

17. Every morning as he gets to work, he would visit his parents seeking their blessings.

18. He is a good interior designer and designs his personal space and even the residence of his close friends.

19. This is something really important for the boss and staffs. He is strictly inclined to the discipline of not disturbing anyone after 6 p.m. In case of urgency of making a call, the first thing that he would ask “Is it right time to talk?”

20. Ajith Kumar makes a practice of eating food in bio-degradable plates. He doesn’t prefer ceramics and plates as he feels them to be easily prone to infections.

21. The reason why he drinks coffee in left hand is because, most of the population is right hand and despite washing it well, the place, where they sip the cup would be infectious. So he would keep on his left hand normally.

22. If you’re planning to meet him, make sure that your nails are clean and neatly trimmed or else he would ask you to do right in his place.

23. If some fans chase him by the roadside while driving and he spots them without helmets, he would go to the extent of buying them helmets. The reason why he insists so much is because he lost his close friends before many years due to head injury after an accident.

24. When he gets a call from producer, he makes sure that he goes to his place and don’t make them come to his place. He treats them like a boss as they are the owners of cinema.

25. When a director approaches him for narrating a script, he would make sure about having a casual chat with them. This is to check the comfortableness. His policy is that however brilliant a filmmaker might be, if they aren’t comfortable for 15 minutes, how is it possible to work with him for a long stretch.