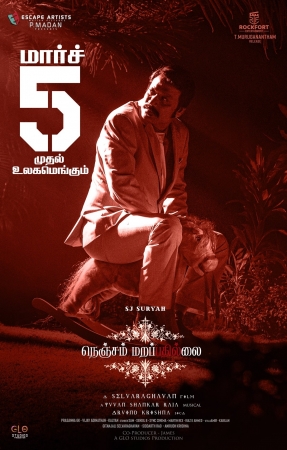 The much-awaited SJ Suryah starrer Nenjam Marapathillai is all set to hit screens tomorrow (March 5, 2021). The film is directed by Selvaraghavan and is produced by Gautham Vasudev Menon in association with Escape Artists Madhan. The film is released by T. Muruganantham of Rockfort Entertainment.
Here are 5 good reasons, why the film will be a crowd-puller

SJ Suryah’s vintage performance
SJ Suryah owns an unparalleled caliber that is very much inherent in nature. The fans are very much excited to witness it in big screens. Moreover, the sneak peek has already increased their crave for more.

Selvaraghavan’s touch
This is the first-ever time Selvaraghavan is coming up with a horror movie. However, it will be far different from the routine horror movies. In fact, Selvaraghavan also needs a breakthrough as the actor didn’t have a big hit after Mayakkam Enna.

Yuvan Shankar Raja’s BGM
Unlike the usual combination of Selvaraghavan-Yuvan Shankar Raja has some commendable hits. However, it’s not the same this time as there aren’t any big numbers except ‘En Pondatti Oorukku Poitta’. However, it is obvious that the BGM will be more powerful.

The star-cast
From the visual promos, it is very much evident that every actor in the movie has a substantial character and they are going to give an impeccable performance.

Expect a different horror
Tamil cinema has already come across a myriad of horror stories, but we can expect something unique and different from Selvaraghavan.