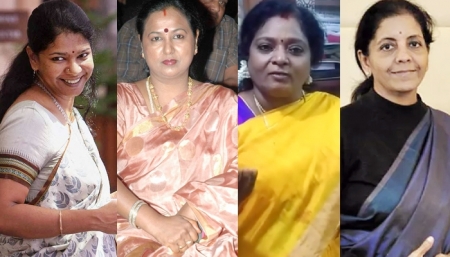 It's Women's Day today. On this day, check out what some women personalities who are ruling the roost in Tamilnadu politics. No doubt former Chief Minister J Jayalalithaa was a symbol of courage and dynamism. It was she who inspired women to enter politics. Check out those who are making hedlines today in Tamilnacu politics:

Kanimozhi
Karunanidhi's daughter, she has rich experience in politics being in public life for long. A Rajya Sabha MP, Kanimozhi is reportedly  DMK's candidate in Thoothukudi. She is a poet, social worker and a orator.

Tamilisai Soundararajan
The TN BJP chief, Tamilisai is a symbol of confidence. A doctor-turned-politician, she has been working tirelessly to ensure BJP's strong presence in  in Tamilnadu. A pet for meme-makers, she is planning to contest this LS polls.

Nirmala Sitharaman
Defence Minister of the nation, Nirmala Sitharaman is a native of Madurai. She has been in the forefront for her bold moves. Even the recent pre-emptive attack in Pakistan by IAF was carried out under her supervision.

Premalatha
Wife of DMDK chief Vijayakanth, Premalatha is adorable called anni by cadres. According to reports, the Rajya Sabha seat demanded by the DMDK, 'during its talks with the AIADMK and the DMK', was for Premalatha.

Vanathi Srinivasan
A leader of BJP, Vanathi is a hard worker and she contested several elections before. She is also the State general secretary of the BJP.She is expected to contest this LS polls from Coimbatore.

Vijayatharani
A Congress MLA from Vilavancode, she has been widely adored by cadres across the state. She is great-granddaughter of eminent Tamil poet and social reformer, late Kavimani DesigavinayagamPillai. Vijayadharani is a former President of Tamil Nadu Mahila Congress.