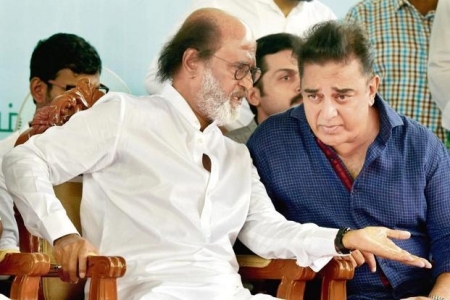 Ever since Rajinikanth and Kamal Haasan said that they would consider working together in their political journey for the goodwill of the people of Tamilnadu, speculations are rife as to when the two would formally announce the same. Even Rajinikanth had clarified that he would take a call only after formally starting his own party and consulting his party members then. Kamal Haasan's Makkal Needhi Maiam too have kept quiet for the past few days as Kamal Haasan underwent surgery on his knee and taking bed rest.

With local body elections round the corner and parties like AIADMK, DMK began their preparations, there was a question whether Rajinikanth would extend his support to the MNM. However speaking to Thandora, sources say, 'It is unlikely. Rajini is busy with Darbar release happening on 9 January. He will start shooting for his next with Siruthai Siva. Also he clearly announced that he would decide on the issue only after floating his own party next year. In such a case, there is no posibility of Rajinikanth supporting Kamal now'.

Remember Kamal Haasan's MNM fought Lok Sabha elections and managed 3.75 per cent votes. Also Kamal Haasan will resume shoot for Indian 2 after he recovers from surgery. Also he has got a movie Thalaivan Irukinran next. So one has to wait and watch.