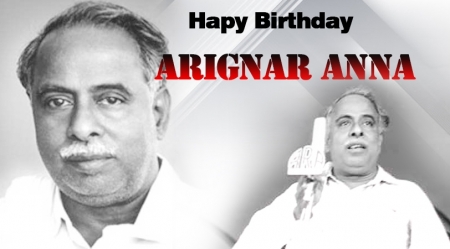 Say Kanchipuram, anyone would immediately say Athi Varadar for the idol of Lord Varadarajar made if dig is kept once in 40 years. Just a few weeks ago, the Athi Varadar Utsavam ended. Besides Athi Varadar, Kanchi is famous for silks. But above all, Kanchipuram is synonymous with statesman, writer, orator C N Annadurai. It was here that Anna, as he was fondly called was born on this day 110 years ago.

Founder of DMK, he became Chief Minister in 1967. Anna was the first non-Congress Chief Minister in Tamilnadu. He voiced for Dravida Naadu. He groomed both MGR and Karunanidhi. Known for sharp speech, people thronged in large numbers wherever he spoke. They would travel long to attend his public meetings. Anna passed away due to cancer on 3 February, 1969. His funeral was attended in large numbers by his supporters. The number of people attending his funeral was a Guinness World Record at 15 million.

1. Annadurai graduated College in 1934 from Pachaiyappa’s College in Chennai. He then earned a master’s degree in Economics and political science.

2. Anna’s political career began when he joined the Justice Party in 1935. It was then that he came into contact with Periyar E V Ramaswamy who also became his mentor.

3. Annadurai was also a prolific writer and an actor. Some of his films include Nallathambi, Velaikari, Or Iravu, and Rangoon Radha.

4. Annadurai married quite young. His wife’s name was Rani, and they were married when he was only 21 years old. The couple didn’t have any children of their own and adopted the grandchildren of Anna’s aunt, Rajamani.

5. Annadurai had an extreme habit of chewing tobacco all the time. This came back to haunt him when he was diagnosed with cancer in the gullet.