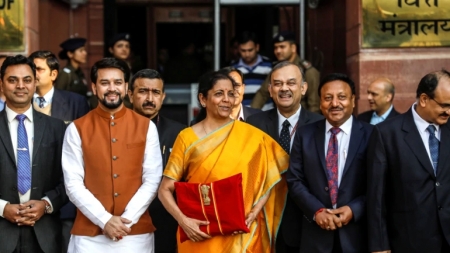 Union Finance Minister Nirmala Sitharaman today announced major relief for taxpayers in the Union Budget for 2020-21 presented in the Parliament.The Finance Minister said, 'Under the new regime, an individual will be required to pay tax at a reduced rate of 10 per cent between income of Rs 5 to Rs 7.5 lakh. For income between Rs 7.5 lakh to Rs 10 lakh, the tax rate has been reduced 15 per cemt. Similarly, for income between Rs 10 to Rs 12.5 lakh, the tax rate is currently 30 per cent and this has now been bought down to 20 per cent. Tax rate of 30 per cent on income above Rs 15 lakh will be continued'.Tabling the Budget, Nirmala Sitharaman, said simplified form of GST beginning this April will be introduced.

Nirmala Sitharaman said the Aviation Ministry will launch the Krishi Udan scheme to assist farmers in transporting agricultural products so that it improves their value realisation. Nirmala Sitharaman said 100 more airports will be developed by 2025 to support the UDAN scheme. She said Rs 1.7 lakh crore has been provided for transport infrastructure in 2020-21. She also said 1,150 trains will run under the public private partnership (PPP) mode, also four stations will be redeveloped with the help of the private sector. Besides, the Minister promised more Tejas type trains to connect tourist destinations. She said a proposal for setting up large solar power capacity alongside rail track is under consideration.

The government aims to facilitate clearances even at the state level and also set up investment clearance cell to give investors free investment advisory, she added. She also said youth and fishery extension work will be enabled by rural youth as 'Sagar Mitras' and 500 fish farmer organisations will be set up. She further said milk processing capacity will be doubled by 2025.The Centre will soon announce a new education policy and the government has received over 2 lakh suggestions on it, Finance Minister said.She said Rs 99,300 crore has been allocated for the education sector and Rs 3,000 crore for skill development for the next fiscal. Steps will be be taken to attract external commercial borrowing and FDI in the education sector, the finance minister said. She further said the government plans to start a programme for urban local bodies to provide opportunities for internship to young engineers. She also said National Police University and National Forensic University are being proposed, while planning to allow degree level full-fledged online education programme by institutions ranked in top 100.

The government has also proposed to attach medical colleges with district hospitals on PPP model to deal with shortage of doctors, she added.Special bridge courses will be designed for teachers, nurses, para medical staff, caregivers, she said.Allocation for Swachh Bharat for 2020-21 stands at Rs 12,300 crore, and the government is proposing Rs 3.6 lakh crore towards piped water supply to households.The government will bring out a policy for data centre parks throughout the country, Nirmala Sitharaman said.The government has provided Rs 6,000 crore for BharatNet in FY21, she said adding that fibre-to-home through BharatNet will link 1 lakh gram panchayats this year. She said all public institutions at gram panchayat levels such as police stations and post offices will be connected digitally. The Minister also announced Rs 8,000 crore outlay provided for National Mission on Quantum Technology and Application over 5 years.The government will also consider corporatisation of at least one major port and listing it on stock exchanges, she said. In order to achieve higher export credit, a new scheme is being launched which provides higher insurance cover and reduced premium, she said. She also said 150 higher institutes will start apprentice training for general category students, adding gross enrolment ratio for girls across all levels of education is higher than boys. The government has allocated Rs 28,600 crore for programmes, specifically for women, she said.

Nirmala Sitharaman proposed the setting up of large solar power capacity alongside rail tracks and said that more Tejas- type trains will  be introduced to connect tourist destinations. She said that the Delhi-Mumbai Expressway will be completed by 2023 and that the Chennai-Bengaluru Expressway will also be launched. 150 trains will be run in PPP mode, also four stations will be redeveloped with the help of private sector. 550 wi-fi facilities have been commissioned at railway stations, she said.