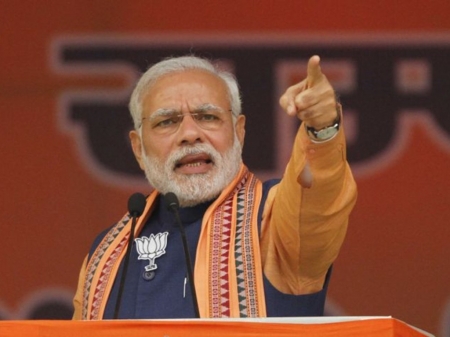 In his first Independence Day address after returning to power with a bigger mandate, Prime Minister Narendra Modi on Thursday announced creation of the post of Chief of Defence Staff to spearhead the three services, called for measures to check "population explosion" and gave a fresh push to the idea of 'one nation, one election'.Speaking after hoisting national flag, Modi, said abrogation of Article 370 as a step towards 'one nation, one Constitution.'

Announcing the major step of appointment of Chief of Defence Staff, a recommendation made after the Kargil war, Modi said it will ensure synergy among the three services and provide effective leadership to them. "Our government has decided to have a Chief of Defence Staff- CDS. It will help all three services to walk together as the country can no longer afford to work in silos," Modi said, adding India has to keep pace with the changing world. A high-level committee set up to examine the gaps in the country's security system in the wake of the Kargil war in 1999 had called for appointment of a Chief of Defence Staff as a single-point military adviser to the Defence Minister.

On Goods and Services Tax, he said it brought to life the dream of 'one nation, one tax' . Voicing concern over "population explosion", the prime minister said it leads to many difficulties and there was need for the Centre as well as state governments to launch schemes to tackle it. Modi said people should be more aware about the issue and ensure that they are able to fulfil the needs of the children they are bringing to this world. Talking about making people's lives easier, he said his priority was to ensure 'ease of living' with government having minimal role in people's lives.

Modi said his government will invest a massive Rs 100 lakh crore on developing modern infrastructure that will aid in nearly doubling the size of the Indian economy to USD 5 trillion in the next five years. He said reforms will continue to be ushered in to help India break into top 50 countries on the 'ease of doing business' ranking. "To some the target of nearly doubling the size of Indian economy to USD 5 trillion in five years may seem difficult. But when we have in five years (of BJP rule) added USD 1 trillion as compared to USD 2 trillion size achieved in 70 years of independence, then this target is achievable," he said.