A masterstroke by EPS in seat-sharing for Assembly polls 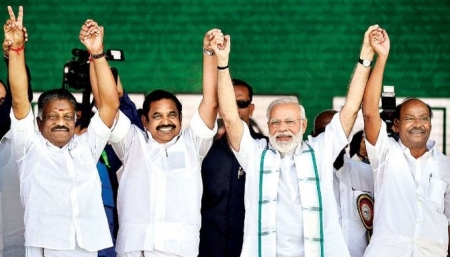 With just a month to go for elections in Tamilnadu, expectations were high on BJP and PMK walking away with maximum seats in the NDA alliance. But call it a shrewd strategy by EPS, PMK has settled with 23 seats while BJP for just 20 seats with Kaniyakumari Lok Sabha seat.

Many political observors say, ' It is a shrewd move by Edappadi K Palaniswami to ensure that both parties settle for as number of seats'.Remember last Assembly elections, AIADMK led by J Jayalalithaa contested maximum seats which meant she had a good strike rate in the results.

Perhaps taking a cue from Jayalalithaa, AIADMK is settling for nearly 170 more seats to contest this time. Many say that EPS finishing the deal with PMK first was praiseworthy. And they made sure that by giving 23 seats to PMK, the rest of the parties in the alliance settle for less than 23 seats. And it did happen with BJP agreeing for 20 seats.Also EPS announced the first list of candidates first before everyone.

It has enthused AIADMK cadres and they are on the field campaigning already for AIADMK and its alliance partners.By sticking to their stand of 13 only for DMDK which eventually led to the latter's exit from alliance, EPS has very smartly removed a baggage from alliance. DMDK is a liability, say many.