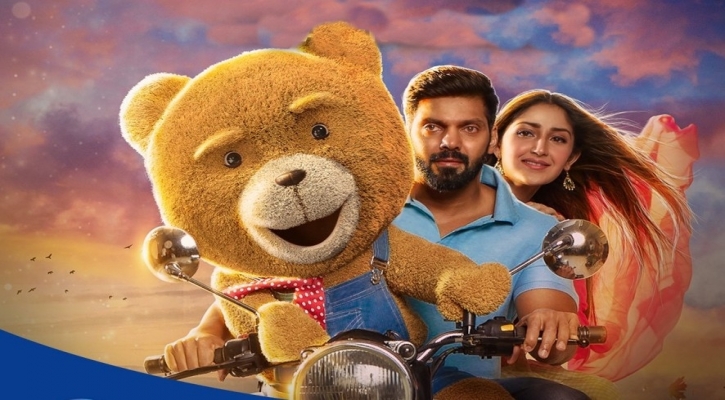 From the word ‘Go’ with announcements made on ‘Teddy’, the comparisons started springing up with Hollywood’s ‘Ted’. But nothing actually was as anticipated as Arya starrer Teddy had a low key expectation. With the filmmaker Sakthi Soundar Rajan having a decent stature for his erstwhile movies like Miruthan, Tik Tik Tik and Naaigal Jaakirathai, the movie did have some good reception prior to its release. Besides, the song ‘En Iniya Thanimayae’ brewing like slow poison for nearly a year made scenarios favourable for ‘Teddy’, which premiered on Disney+ Hotstar last night.

First and foremost appreciable part about the film is that director Sakthi Soundarajan doesn’t beat around the bush by letting the ‘Flashback’ elements come in. Audiences are straightaway introduced to the premise as prologue with Sayyeshaa’s character and Teddy secret followed by Arya’s introduction. The first hour actually swifts in the right direction and momentum with lots of humour and in contrast, the second hour comprises more action blocks. The director should have attempted for a humorous touch in second half as well by slightly reducing the action blocks. Anyways, there are many moments that will definitely win the hearts of kids and family audiences.

Magizh Thirumeni looks powerful with his screen presence, but the mind game between Arya and him could have been extended a bit. Satish and Karunakaran have a minor prominence, but are good. Gokul essaying the role of Teddy deserves special mention. This character is the soul of this film and he exerts a beautiful job. D Imman’s songs are awesome, but he could give a small try in shifting paradigms with his BGMs. Cinematography is good. Sayyeshaa appears very little portions in the film, but its nice to see the real life couple together onscreen.

On the whole, ‘Teddy’ would have been a wholesome entertainer urging us to prefer second-time watch if the humour treatment was continued in the second half as well. However , it’s a decent attempt irrespective of few loopholes.

Verdict : A decent attempt with everyone doing their jobs genuinely. A little more intensity in second half would have been made it more engrossing.
Thandoratimes Rating :