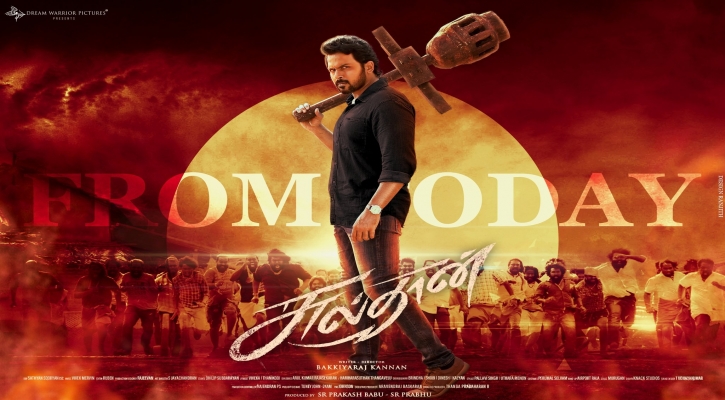 Actor Karthi’s Sulthan has been under making for more than a year and the shooting got stalled due to pandemic issues. Off the late, the pending portions were shot with Karthi in Ponniyin Selvan hairstyle (Thanks to his hairstylist for making it look neatly combed and gelled). The film is directed by Bhagyaraj Kannan and is produced by Dream Warrior Pictures SR Prakash Babu and SR Prabhu.

The story revolves around Sulthan (Karthi), born into family hooligans and assassins, whose lives have been all about bloodshed and violence. After the death of his father (Napoleon), which he comes to know that it was a police encounter, he decides to change the lives of 100 henchmen, who are his brothers so as to save them from the wrath of policemen. On arriving herein a village to accomplish a task taken by his deceased father, Sulthan has bigger enemies to face.

The way Bhagyaraj Kannan has conceived the story is good. Dream Warrior Pictures always ensure that there is a message in their movies have inserted the concept of ‘AGRICULTURE’. However, the way, it is presented doesn’t make sense. One might get perplexed, why the visuals are tinted with sepia tone. Is it show that the movie is rustic. On the other hand, it’s very much blatant that makers of this film have targeted Telugu market to encash the fan base of Karthi there. It is more like watching a Telugu dubbed version movie. A humble request to the producers, directors and actors of Tamil cinema! Please make movies for Tamil audiences, not the other states. its okay to have an amalagamantion of artistes from all regions to grab the respective audiences, but then there has to be certain substantiality in script.

Karthi looks too tired throughout the movie. He is running out of energy in both dance and action sequences. The way he projected himself in Theeran Adhigaaram Ondru, Siruthai and Paiyaa was outstanding and to see him now in tiresome look is little disappointing. Rashmika gets the whistle of her insta followers in theatres. Lal is outstanding. Ram of KGF fame has been reduced to a comedian. The action sequences  are at its best and are one of the best highlights.
Yuvan Shankar Raja’s BGM is remarkable. After a long time, he has offered his best stroke.

As on whole, Sulthan is a passable show that has formula of Telugu cinema written all over it. A predictable storyline with lots of discontinuities in between the scenes, but is engaging in few parts for the concept.