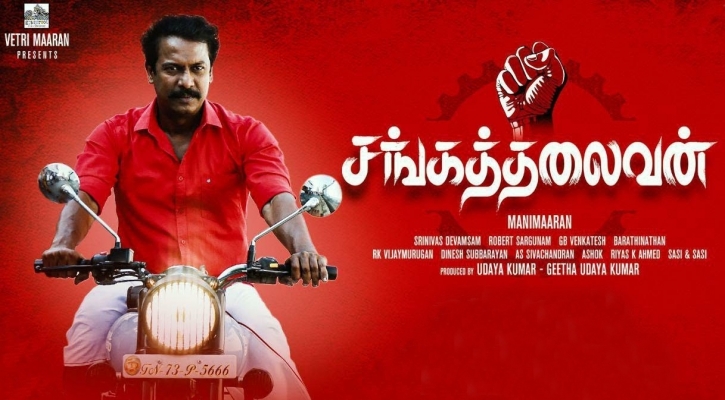 Samuthirakani and Karuna as starrer Sangathalaivan is a movie that speaks about labour welfare and the relevance of left labour unions.Set in a village which thrives on small powerloom where labours toil for over 12 hours in unsafe conditions, the film speaks about efforts taken by a few to bring changes in their lives. The movie revolves around karunaas, an upright worker in a mill run by Marimuthu. He staya away from labour union leader Samuthirakani, fearing he may lose his job.

Samuthirakani is ably assisted in all his tasks by his wife Ramya Subramaniam. As it happens, one incident changes Karuna as life. He ia compelled to take side with Samuthirakani. A series of battle begins which culminates in an emotional manner. A revenge saga. Left is right ends the filmmaker. A typical Samuthirakani does a good act. He plays a valourous labour union leader.

Ramya as his wife is excellent choice. Sunulakshmi and Marimuthu does a good job. The flesh and blood of the film is Karunaas. He emotes well and fits the bill well.Based on the novel Thariyudayan, the movie speaks loud and clear of the labour unions' struggle for ensuring welfare of workers. At places, the movie gets preachy and loud.

Director Manimaran has gathered guts to come out with an off-beat film that tries to educate you more.