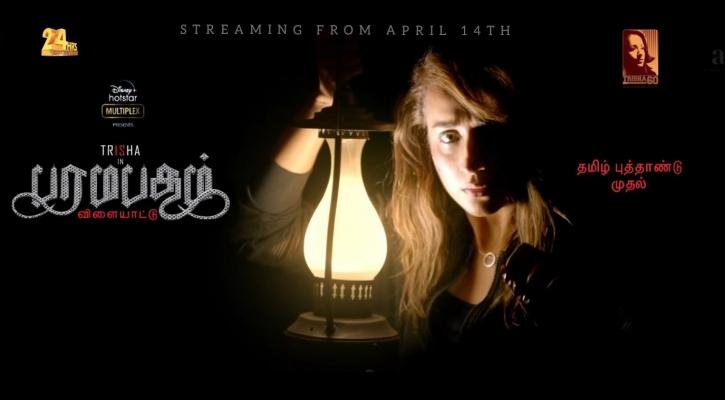 Actress Trisha’s 60th film Paramapadham Vilayattu (Snake and Ladder) was supposed to hit screens nearly couple of years ago. However, the movie didn’t have its release due to various reasons including the pandemic crisis. The film is premiered on Disney+ Hotstar for the festive occasion of Tamil New Year Day (April 14, 2021).

The story opens with Trisha being held as captive inside a room and her daughter with speech and hearing impairment as well. It is revealed in flashback that she is a doctor, who had to handle the serious case of Tamil Nadu Chief Minister, who was admitted in hospital due to serious ailing health conditions. However, with his health conditions ameliorating, she is shocked to see him dead. With the cabinet minister insisting the Hospital management to remove all the CCTVs, Trisha actually does have a proof of what actually happened to the deceased CM. Will she be able to overcome the odds and save herself from the clutches the baddies, who have captured her and bring out the truth?

Well, as you go through the story, its very obvious that it is centered on the conspiracies involving the Tamil Nadu scenario that is prevailing for over past 3-4 years. However, the movie doesn’t have a gripping narration and its easily predictable. 10 minutes into the movie, we are clear about what’s gonna happen next. Trisha looks so dull throughout the movie and the spark in her is missing. Maybe, it’s the director, who should have insisted her to come up with more effort. But we need to appreciate the efforts she has taken to maintain her physique. Nandha, Richard, Azhagam Perumal and others have no scope to perform.

When it comes to the technical aspect, it’s yet more disappointing.

On the whole, Paramapadham Vilayattu as so much depth in title, but the entire movie is vague and directionless and bleak substance.