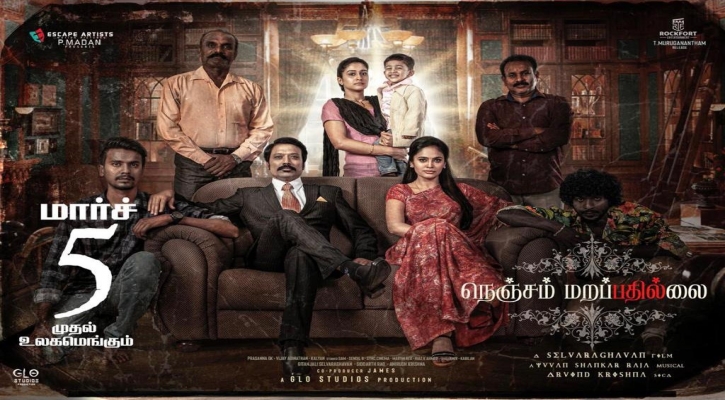 Filmmaker Selvaraghavan’s earnest thought on Nenjam Marapathillai would have been a low-budget film that will earn good profit for the producers merely for the brand names like Yuvan Shankar Raja, SJ Suryah and himself. In fact, the combination had created sensational waves. Having cited ‘Low Budget ‘, we blatantly find it everywhere and what’s more disappointing is the cinematography of Aravind Krishna. Nonetheless, even this can be related to the Stephen King kind of stories, where the technical aspects aren’t given more prominence, but the emotional quotients.

Nenjam Marapathillai lacks the punch that it had created with its expectations. There are few moments, which are praiseworthy. It’s one and only SJ Suryah. His performance is outstanding and he endow his fans, what they have always expected from him. A big question is why both the brothers Selvaraghavan-Dhanush have aversion towards pet animals. In “3”, we find Dhanush mercilessly killing a dog and here it’s same with Selvaraghavan.  Perhaps, they’ll come with a justification stating that it shows the characters’ cruelty and the movie is not for the weak-hearted.  Alas! the complete experience is disappointing. Nandita Swetha is good with her performance and Regina Cassandra doesn’t have anything to exhibit. The other characters are just okay.

The makers now might be sprawling out and relaxing due to OTT rights and dubbing rights through which some sum of money could have been inherited. But content wise, it’s worst. One more blunder from the team is the revealing of 3 trailers followed by visual promos – Sneak Peek and ‘En Pondatti Oorukku Poita’. Instead of watching the film in theatres, it’s advisable to watch these visuals for these are the only cherry-picks.

Verdict : The trailers, sneak peek and En Pondatti Oorukku Poita are the only takeaway. So better watch them again instead spending money for tickets
Thandoratimes Rating :