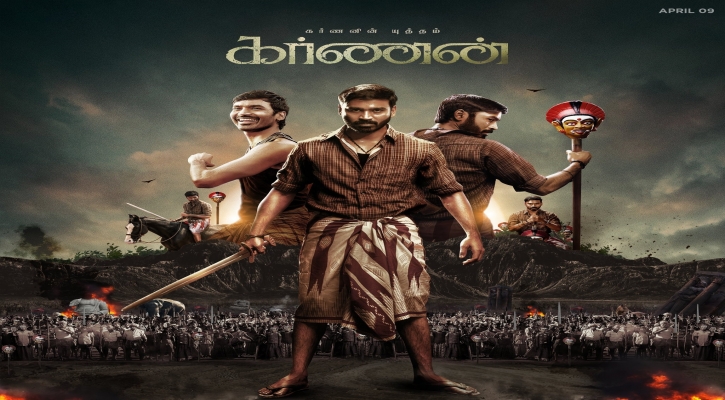 From the word ‘Go’ with the announcement, the expectations over Dhanush’s Karnan have been enormous. With the pre-release buzz amongst the trade circles stating that this is the highest-ever bid for a Dhanush movie in all areas, the anticipatory graph was spiking up stupendously. With three songs from the album turning to be decent hits, it furthermore escalated our curiosities upon the movie.

The story revolves around a small village in Tamil Nadu, which remains unknown even to the closest towns and cities. Dhanush playing the role of Karnan is one among those villagers, who are often degraded by another group of people, who claim themselves as superior to them.  The upheavals and violent disturbances thrust upon these people and how Karnan tackles and brings light for his group forms crux of the story.

The time and tested plot doesn’t have any big surprises. Usually, there would be some 4-5 mass sequences in content-driven movies that Dhanush is part of.  We do keep expecting the same here. Even during the point of intermission, we are brimmed with blind belief  that the second hour would have some power-packed moments, but instead, the movie remains the same. Dhanush gives his best into the role he has essayed. The one particular scene, where he makes the bus to stop in his village is clap worthy. But such sequences aren’t found often in this movie. Rajeesha is a talented actress, but goes unnoticed in this movie. So is Gauri Kishen, Lakshmi Priya. Director-Actor Lal does exactly what his role demands for.

Mari Selvaraj has projected the movie in such a way that it is more like reading a novel. But after a certain extent, it starts creating a sort of boredom with the repeated pattern of shots. Films like Karnan do need some strong dialogues to enhance the stature of entire movie, but then, it doesn’t have a single moment as such. The supporting artistes have done a decent job.

The musical score by Santhosh Narayanan is appreciable. Except for uttradhinga Eppove looks unfit for the movie’s premise. Cinematography is decorous. As on whole, Karnan would have been a brilliant piece of work, if Mari Selvaraj had written a powerful screenplay. For now, Karnan is a one-time watchable show