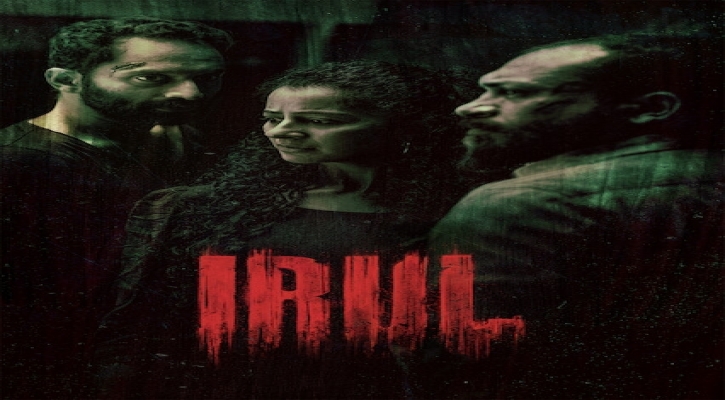 Every time, when Fahadh Faasil comes up with a new release, the expectations beyond the usual paradigms of a superstar. A couple of reasons do justify this stature. One being his colossal performance and another one is the content-driven premise that his films own. Even a film like Varadhan, which was shot inside a single house and its ambience, where the entire movie got its high shot with climax, he managed to win the applause. Apparently, it all looked the same with the visual promos of Irul, which finally got premiered on Netflix from yesterday (April 2, 2021).

The film revolves around a novelist and his girlfriend (Shoubin and Darshana), who decide to take a week off from their regular works for shooting the breeze. When their car has a breakdown during journey at late night and heavy rain, they seek shelter in a desolated house and are invited inside by a stranger. Well, one among them is a murderer.  Fahadh Faasil’s performance as usual is over the top. He keeps displaying the variations at different stages of the film. From being a stubborn, intelligent host to the sudden villainous display (As per the other characters’ version) followed by the climax act, he just keeps us enthralled. Soubhin does a complete justice to his role. Darshana Rajendran sticks to perfection. The cinematography and production designing deserves all praises and so is sound department.

There is a particular scene, where it looks more like a play, where the three characters debate about the protagonist in the novel. It’s an unparalleled attempt, where the entire scene is staged in single shot.  Well, the film isn’t really the best from Fahadh Faasil, but yet, it keeps you guessing till the end on who the real killer is...

The team of writers and director Nazeef deserve tons of appreciation for such an amazing edge-of-seat psychological thriller. However, if few complicated scenes were avoided and the writing had been intact, it would have been appealing.

Verdict : Outstanding performances and surprising twists, which now and then gets eclipsed by complicated narration
Thandoratimes Rating :