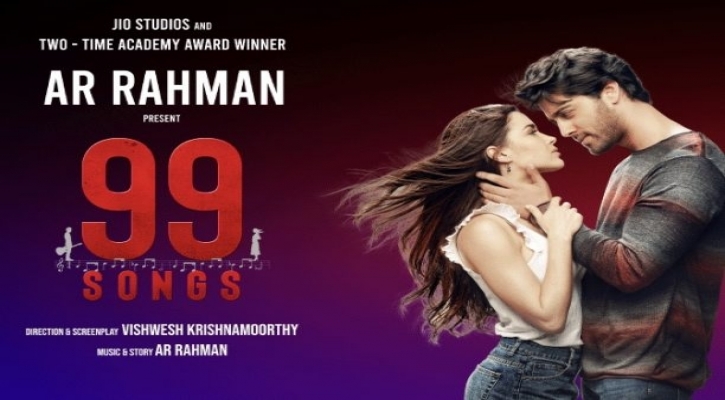 Academy Award winner AR Rahman has been keeping the entire film industry awaited with his Le Musk and 99 songs, which have been under the process of materialization across the years. Finally, the latter arrives in a much elegant way with the red carpets already spread out with the flawless musical score of AR Rahman comprising 14 songs.  Finally, the film is releasing today (April 16, 2021).

The film delves into the life of Jay (Ehan Bhat), who has been kept far away from music by his father as he feels that it is the same profession that ruined their lives. However, Jay gets into the same forbidden domain of music and that’s through the angelic Sophie (Edilsy Vargas), whose arrival in his life takes him through the pursuit of music. Her father (Ranjit Barot) stands amidst them as barricade insisting that he has to compose 100 songs before getting her hand for marriage. This point of moment takes Jai through various encounters with various people and incidents that takes him to the predestined lands of what he hadn’t expected.

AR Rahman’s vision predominantly appears throughout the film and it is present in every frame. It shows the depth of detailing that he and directed Vishwesh have given across the years before filming the movie. The emotional aspects in 99 songs are the biggest strength. Of course, music and emotions are inseparable that has been very well executed through AR Rahman’s music and beautiful visuals. Both the lead actors Ehan and Edilsy have given their best into their roles. It is evident that they have prepared with heart and soul for this characterization. The film tries to break the barrier among the boundaries as audiences as ‘Music’ is the common language and has a soul that will connect with everyone. AR Rahman’s motive of projecting his profession in a pure life and far away from what the common men and women judge it as a platform that will let musicians indulge in bad habits is broken here.

On the whole, 99 Songs is a beautiful experience, which has to be watched in theatres for the significant visuals and theatre play impact.